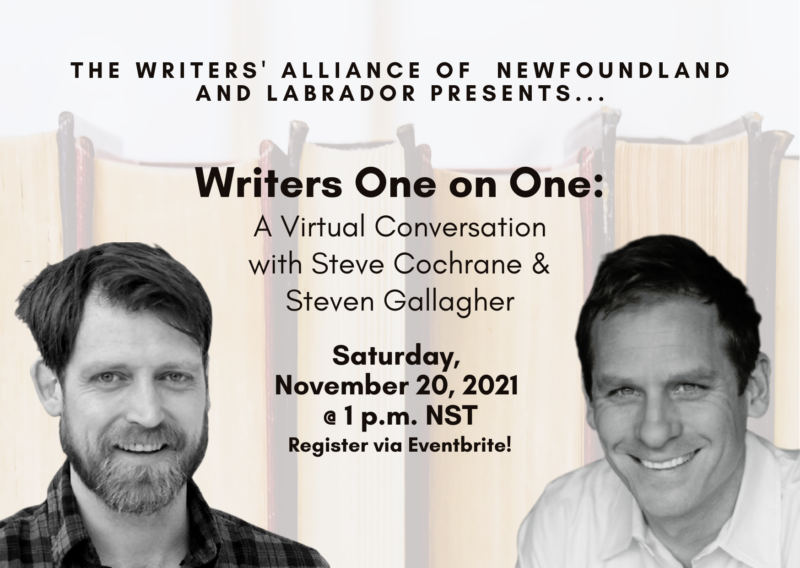 Tune into a virtual conversation with Steve Cochrane & Steven Gallagher, as these writers go one-on-one to tackle a variety of topics.
ABOUT STEVE COCHRANE:
Steve Cochrane is a writer/director/actor from Mount Pearl, Newfoundland & Labrador, Canada. His writing credits include: The Imperfects (Netflix) Republic of Doyle (CBC) Hatching, Matching & Dispatching (CBC) Endgame (Hulu) Ransom (CBS) Taxi Brooklyn (NBC) Somewhere Between (ABC) Lost Girl (Syfy) and Hulu’s The Hardy Boys, which Steve developed for television, and was just nominated for Daytime Emmy for Outstanding Young Adult Series. Steve’s feature film We Were Wolves (Co-write with director Jordan Canning) was selected to the Toronto International Film Festival in 2014. In 2009 Steve made his mark in half-hour comedy as series director and co-creator of the critically acclaimed comedy Three Chords from The Truth (CMT/MOVIE CENTRAL). Three Chords was nominated for two Gemini awards including Best Comedy or Variety Program or Series and won for Best Ensemble. Steve wrote and directed the online component for Endgame, creating an interactive one-hour gaming experience with Secret Location, and winning the Digital Emmy for Best Cross Platform Fiction at Cannes. Steve is currently developing a one-hour municipal-politics-procedural Queen City for CTV (Sienna Films), adapting Miriam Toews best-selling novel A Complicated Kindness into a ten-part limited series, and working with writer/actor/director Marianna Palka (Glow/Good Omens/Happy) on Steve’s serialized one-hour thriller, The Good Neighbour (WAM Media Group) which will be set in Glasgow, Scotland, and Northern Canada. Steve is a founding member of the award-winning sketch comedy group The Dance Party of Newfoundland who performed to sold out crowds in Toronto, New York, Chicago and at the Just for Laughs festival in Montreal. Also known as a playwright, Steve’s first musical No Change in the Weather will be presented by Mirvish Productions in Toronto in November of 2021.
ABOUT STEVEN GALLAGHER:
Steven Gallagher is a writer, actor, and director based in Toronto. His play, Stealing Sam, was most recently seen at Albert Theatre Projects. Stealing Sam has also been performed in New York at the United Solo Theatre Festival (Award for Best Drama) and the Toronto Fringe (Best of Fringe, Patrons Pick, and from NOW Magazine, Outstanding Play, and Production). Other recent plays include the premiere of Blackout, written with Anton Lipovetsky, a new musical based on the 2003 Toronto Blackout and produced by The Musical Stage Company in collaboration with The Canadian Stage Company in Toronto, Summer 2021. His musical Drama 101, written with Kevin Wong premiered at the 2019 Toronto Fringe and has been produced across Ontario. His musical Pollyanna, written with Linda Barnett, was shortlisted for the Best New Musical at the 2016 Tom Hendry Awards for the Playwrights Guilds of Canada. As an actor, he has been seen across the country, favorite roles include Fagin in Oliver! And Albin in La cage Aux Folles (Neptune Theatre, Merritt Award nominee) As a director, he most recently directed Fully Committed, starring Gavin Crawford, at the Grand Theatre in London, Ontario. Other directing credits include Steve Cochrane’s Birthday Balloon (Next Stage Festival), Myth of The Ostrich (Toronto Fringe), and Rumspringa Break (Next Stage Festival.)