A TEXT-BASED Summer Writing Contest for Youth (ages 30 and under!)

(September 24, 2021) – This writing contest (for writers ages 30 and under) paired our obsession with technology and instant messaging with our shared love of creative writing! For this writing prompt, WANL asked applicants to craft a story based on one of the last text messages (or text-based communication, i.e. Instagram direct message, Facebook messenger message, etc.) they have received. Paired with a screenshot of the text they’re working with, writers used that message to kick off their story.

We had so many amazing submissions, and we’re so excited to share the results with you! The prizes will be paid to the winning authors via email money transfer. Congrats, winners!

“I’m on my way.”
The words seemed to come from someone trapped within her. It was one of those half invisible evenings on The Harbour. Day in, day out, the gulls still laughed and the water still menaced. The visitor conjured salt-stained memories of the wrath of Poseidon, his waves that never failed to cast away sailors and wanderers alike. Ada, a reluctant guest of a forgotten shore, could be a siren herself – if only there were witnesses to her silver dagger that could pierce almost as sharp as her gaze. It was a token of nobility there, but never here. She bitterly exhaled.
Though it could not be seen under The Harbour’s vast grey, Ada had a gleam about her. She carried her immortality lightly through the waterfront she refused to call home. There, she saw the urgency of time. “So this is eternity”, she thought.
Ada did not find kinship until the rare clear nights when she lay under white pinpoint lights, afraid to rest her eyes before they departed again. For this reason she refused to leave The Harbour until the now outer space reached her grasp. It was the survivor’s instinct to be near the water that was connected to her Moon as she was. It had been centuries since she roamed her glowing halls. It had been centuries since Adhara had fallen, since gravity finally claimed her. Each moment since clouded the mind with a darkness unknown even in twilight.
“I must be there soon”, called that voice within her again.
“On Mother Moon I wish–”
She stopped herself. Her kind was barred from such language. After all, wish fulfillment was their duty. It would be treachery to use it for oneself, but what is an exile to do? As if bound by fate or cruel purpose, Ada was moved by the voice once more – the voice of Adhara, her pure celestial form. It trailed on for several seconds. “I’m on my way”.
“Come rest where you have awakened…”
Sister Earth’s tides of time had finally gotten the better of the visitor. A fallen star is dull when she reaches land. As the clouds parted for what seemed like the first time in her reckoning, Adharas The Fair shined through the girl’s reflection in her solitary pool. She rose to a stance of undeniable strength, her robes flowing around her with a breeze that painted her as a phantom. She thrust her knife into the sky with a fluid motion and whispered with a voice like the wind: “I’ll be right there.”
With trembling hands, the reborn sorceress of the night pierced holes in the endless black blanket above her to create a vision of stars. When the rain started to trickle down her neck, it was as if they were weeping. She drifted into sleep for the very first time, and returned to the Mother Moon’s halls.
“You’ve finally arrived.”

Our second runner-up is Olivia Bradbury!
Olivia will receive $50 for their winning entry.

“Who was it?”
My cell phone dinged with the message from my mother, which I glanced at only for a brief moment.
I couldn’t respond, not right now. I was standing in the middle of my living room. I lived alone, but had just received a visitor. He was sitting in the armchair, looking around as though he was uncertain as to what anything was.
“Are you alright?” I asked him, my voice faint because I feared that speaking too loudly would shatter the dream before me.
“I…don’t know,” he replied. His voice was so familiar it made me want to cry. “I don’t know why I came here.”
I’d been Facetiming my mother when the knock came at the door. Hanging up with a promise to call her back, I’d gone to answer it and found…him. He was about six feet tall with a slim build, brown hair, and brown eyes. He was wearing a suit that was somewhat dingy, but otherwise looked nice and expensive.
“Do you know who you are?” I whispered.
He looked at me for a moment, lost, then his brow furrowed as though he was trying to conjure a memory. “No,” he eventually replied, looking almost sad.
“That’s okay!” I assured him. “It might take a while. Your name is Elliot. And I’m Danielle. You call me Dani.”
He studied me and cocked his head to the side, reminding me of a curious dog. “Dani?
My heart sang to hear him say my name again. “Yes, yes, good! What do you remember?”
“I…don’t know. I woke up somewhere, on the ground. My arms ache. I feel like I was climbing or…digging. I feel like I was under the ground. Then I started walking because I felt like I needed to be somewhere, and…I ended up here.”
“You’re my fiancé,” I told him, showing him the engagement ring I still wore. He eyed it without recognition. “We dated for four years, then got engaged. But one night you had a car accident and…” I hesitated. “You died.”
He blinked. “I…died?”
I nodded. “Yes. I was devastated. I worked tirelessly, performing every practice I could find online or in books to try to bring you back. Eventually Mom found out and threatened to get me psychiatric help if I didn’t stop. I pretended to stop, and eventually moved away so I could have the privacy to work as I needed. I reached out to anyone or anything to give you back to me.” I crossed the room and hugged him, the side of his head resting against my chest. “And they have.”
In response, Elliot quietly said, “Your heart.
I looked down at him. “What about it?”
“It…beats.”
I didn’t know what to say to that. He’d just returned from the dead. Of course he was acting strangely. His memories would return. I refused to entertain any doubts. I smiled and held him closer. Meanwhile, somewhere nearby, my mother’s text message flashed again.
“Who was it?”

Our third runner-up is Olive Fortune!
Olive will receive $50 for their winning entry.

Cya guys in 10 days,” said Captain Roger Spickett to his wife Elanor and his son, little Arthur.
“The crew and I are off to find a new land of trees, sea, ocean and fish,” said the confident captain.
“We will find a brand-new paradise. I promise!”
A loud and deafening horn blew. Captain Spickett marched onto the Scottish Maid.
“Is he going to be okay, mum?” asked little Arthur.
“I don’t know small one, I don’t know,” responded the worried mother and fearful spouse.
Looking into her son’s eyes, she wondered if she would ever see his father again. Something deep down inside Elanor’s heart, said not.
Captain Spickett and crew are on the waves and the sky swirls with dark clouds. Spickett in the Crow’s nest, and crew on deck. The water had started to shimmer curiously. Something shiny was just touching the surface.
Spellbound, the crew leaned over the ship’s edge, transfixed by the beautiful sparkle. The ocean’s waves rippling.
Suddenly, hundreds of hands broke the surface of the water, attaching themselves to the ship above. Mermaids, pulling their bodies out of the water and onto the ship. Fearing the worst, Spickett looked below. Human torsos and long scaly tails. He thought would he return to see his family in ten days?
He had to get his crew to safety. But could not. The ship wouldn’t make it. There was an emergency rowboat tethered to the ship. And then it came to him. He would leave his crew. The fog rolled in. He climbed down the Crow’s nest, lantern in hand.
As a diversion, he tossed the lantern into the sky. Climbed into the rowboat, untied the ropes from the ship’s binding. Using the oar, pushed himself away from the Scottish Maid toward the unknown. Behind him, the Scottish Maid sank.
Blinded by greed and furious with his abandonment, he threw himself into the ocean, never to be seen again.

This writing contest pairs our obsession with technology and instant messaging with our shared love of creative writing!

For this writing prompt, WANL is asking applicants to craft a story based on one of the last text messages (or text-based communication, i.e. Instagram direct message, Facebook messenger message, etc.) they have received.

Paired with a screenshot of the text you’re working with, use that message to kick off your story!

1) Submit a screenshot of the singular text-based message you are working with, cropping your image to show just the text itself. (Note: please omit any identifying contact names, should they include a first and last name, for privacy/security purposes.)

2) Use the message as the opening line of your story – it will also double as the story’s title.

3) Begin writing a short story or work of creative fiction based on an imaginary scenario built from this now out-of-context message.

Send your submission to info@wanl.ca.

Submissions should consist of:
1) a screenshotted message in .jpg format
2) a document with your original writing in .docx  or .doc format

WANL is offering three prizes for our “TEXT-BASED” writing contest:

The prizes will be paid to the winning authors via email money transfer.

Please note: This contest is open to WANL Members only.

Here’s a short example to get you started: 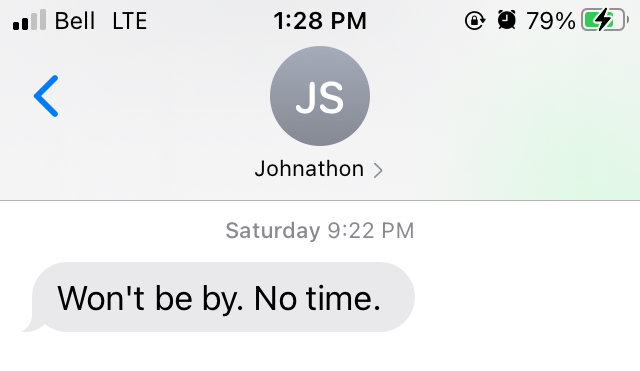 This wasn’t the first time she had heard that. He seemed to have all the time in the world for his job, his friends, his hobbies, and of course, that damn dog that he loved so much. But it seemed like he never had any time for her.
To say the relationship was “on the rocks” was an understatement – it was buried by a tsunami of broken promises, under the rubble of an earthquake of soul-shattering half-truths and little white lies, with a tornado of mixed feelings swirling around.
The relationship wasn’t on the rocks so much as it was stuck between a rock and a hard place, if we’re continuing with the earthly analogies. To break up with him meant a world of hurt and heartbreak. Yet, to keep going somehow would equal the same…

(Total word count including title: 140, so, more words yet to come to meet submission requirements!)