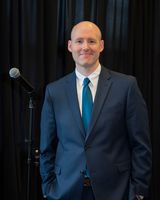 Christopher Tobin is a stand-up comedian, author, dramaturge, and teacher. In September of 2022, his debut novel, What Happened to Maggie Dalton? was released by Flanker Press Ltd.
As a comedian, he began at Yuk Yuks International Comedy Club in St. John’s in 2011 and has since appeared in three Just for Laughsshowcases, the Braxton Comedy Festival, the St. John’s Comedy Festival, and various shows as part of Downtown Comedy in St. John’s.
As a dramaturge, Christopher has written and performed in stage adaptations of Rod Serling’s The Twilight Zone—teleplays adapted for live stage performance for School Zone Productions, which has produced fifteen of these episodes over the course of five shows during 2012–2017.
A graduate of Memorial University of Newfoundland with a Bachelor of Education, he teaches junior high and high school English. He lives with his family in St. John’s.
Photo courtesy of Kings Photography and More.
Back to
Member Directory