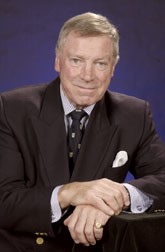 William Pryse-Phillips has been on the Faculty of Memorial University of Newfoundland since 1972 and has been Professor of Medicine (Neurology) at Memorial since 1980 and Professor emeritus since 2004.  Following medical school at Guy’s Hospital, London and further training in Medicine, Psychiatry and Neurology in England, he came to Canada in 1970. He first worked in primary care in Flin Flon, Manitoba and then in Neurology at Queen’s and McGill before heading as far east as one can go in Canada without actually drowning.

His clinical and research interests have included genetic neural, muscular and cerebellar diseases, migraine, dementia and the epidemiology of multiple sclerosis.  He is a reviewer for six journals and on the editorial boards of three others and is the author of over 120 peer-reviewed papers or book chapters and of Epilepsy (1969); Essential Neurology (with T J Murray; in four English, two Spanish and one Arabic edition since 1976), and Companion to Clinical Neurology (Little, Brown, 1995; 2nd edition Oxford Univ. Press 2003; 3rd edition 2009).

His hobbies are salmon fishing, long (900 K) walks, extreme gardening, questionable cooking, iconoclasm and writing for pleasure. He is a University Orator. Free Flight (2013) was his first published work of fiction, and a finalist for the Childrens’ Book Awards in 2013.; his new children’s book, “Mr. Grumbles” is a series of 14 bedtime stories very much based on St. John’s, a black Labrador and a park-keeper told by a father. It is intended for children aged between three and eight.